THROUGHOUT HER LIFE, Susan Heapes made a habit of defying the odds.

The Dubliner grew up in the Bonham Street flats in the Liberties. And more or less from the outset, she was obsessed with soccer.

“My mother will tell you that I always wanted the ball and I never wanted Barbies, I was a little tomboy,” she tells The42.

“I was the only girl [who played soccer] and all I wanted to do was have a ball or play with the boys. I just always wanted the ball.

“Luckily enough, the flats I grew up in had a tar pitch that they made.

“I was never out of that and just constantly playing with the boys from about seven years of age onwards.”

Of course, some obsessions can be unhealthy, but for Heapes, the opposite was the case. Her passion for soccer ensured she did not succumb to the temptations that cut short the dreams of so many others in the area.

“I just loved it so much, all I wanted to do was play football, so nothing [else] was really on my mind, it 100% kept me away from drugs, jail and heartache. It definitely kept me on the right track.

“People I did grow up with, some of them are on drugs, some ended up in prison. So it hugely helped me, it really did.”

A combination of strong willpower and positive role models also ensured Heapes avoided the dire fate that some of her friends were destined for.

Twomey, a one-man emerging talent programme in his day, invited Heapes to play for the St Catherine’s side he coached.

“He must have heard that I was playing in the flats, beating the boys or whatever,” she recalls.

“I remember one day, he knocked at my mother’s door. He had a girls’ team. He asked my mother could I come up and train and join the team.

“So my first match was when I was nine years of age, probably playing U12s.

“So I was with Bernard for over 20 years, minus the time I went to Arsenal. When I came back, I was back with Catherine’s.

“My heart has always been with St Catherine’s and it always will be.”

“He used to always run up and down the line and he’d be shouting after you: ‘Go on, Heapesy!’

“He’d be saying it to all the girls. He was always there in your ear, encouraging you. He gave half of his life to St Catherine’s football team.

“I don’t remember one occasion where there was any bad comment. There was frustration from players, but there was never anything bad. You would never get a player and Brother Bernard fighting or anything like that.

“It really was 100% all fun, all happy. He just wanted you to enjoy yourself. He didn’t care about the result after that.

“There’s only one Brother Bernard, he’s one of a kind indeed.” 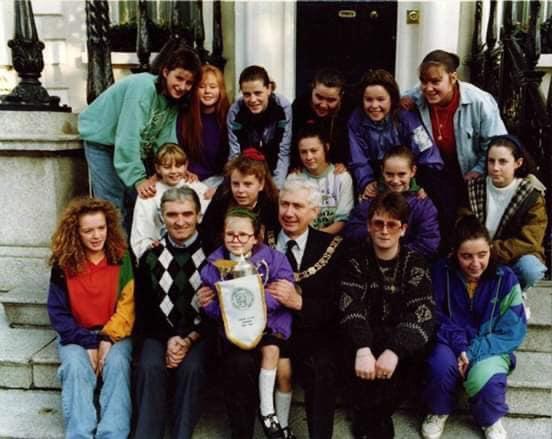 As much as Heapes enjoyed life at St Catherine’s under Twomey, a bigger opportunity would soon present itself. While she was playing an Ireland U18s match, Vic Akers, the manager of Arsenal Ladies, came over to watch.

Heapes, as well as team-mates Caroline Thorpe and Yvonne Tracy, all did enough to secure a trial with the Gunners. They accepted the offer and within a month, the trio of youngsters were living in North London, sharing a flat with fellow Irish players Ciara Grant, Emma Byrne and Grainne Kierans.

“It was crazy and it was so quick. 17 years of age, moving away from home for the first time,” she remembers. “But it did help that the three of us were together. That helps a lot.

“It also helped when we got over there that they gave us somewhere to live.

“So there were six Irish girls in one flat — now, it was a big enough flat. Even though you were in a different country for the year, you still had your five other friends with you. We all knew each other from the Irish internationals anyway, so it wasn’t as if we were moving in with strangers.”

And while Heapes appreciated the company of a few like-minded individuals, it still wasn’t always an easy environment for a homesick teenager.

It was my first time moving out of home and a couple of times a week, you’d be thinking: ‘I wish I was at home. I wish I was with my mother or father.’ And then, my sister was pregnant and in November, she had a baby. That made it even harder.

“I was going back and forth every free weekend we had. It made it more difficult to be away from home that I had my little niece.

“But I’m delighted I did the year. I think if I didn’t go, I would have regretted it.

“It was a great experience and I wouldn’t change anything for the world, other than the fact I’m a Man United fan [she laughs].”

Be part
of the team

Access exclusive podcasts, interviews and analysis with a monthly or annual membership.

In that era — Heapes signed in 2000 — even for a club like Arsenal, widely regarded as the best team in England, women’s football was not professional.

Consequently, when they weren’t playing or training, Heapes and her flat-mates worked a second job.

“Arsenal were sponsored by Nike and they had a catalogue. You couldn’t order online back then, and if people wanted to order stuff, they’d order it off the catalogue. We worked in the house of the catalogue, and we posted stuff out to them. We only had that now for a few months.

“Then that went dry and [Vic Akers] got us a job in the laundry of the men’s training ground, which was unbelievable. You’re eating your breakfast and dinner with the likes of Thierry Henry, Tony Adams, Lee Dixon, Martin Keown, Ashley Cole, they’re sitting just a couple of tables away from you. It was very surreal.” 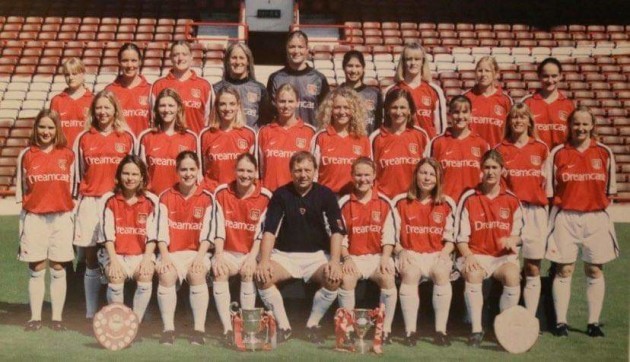 Heapes, pictured in the back row, furthest to the right, during her Arsenal days.

And did Heapes find these high-profile stars to be approachable?

“They would have been,” she replies. “It was like a buffet. You’d sort of queue up and if they were standing beside you, they’d obviously know you were part of the ladies’ team. They’d chat away to you. I think the person that chatted to me most was Martin Keown. He has an Irish mother and he was telling us he could have played for Ireland. He was asking where we were from. He was really nice, I have to say. They all were, but he really took the time to see how we were settling in, coping and stuff.”

Ultimately, Heapes found it difficult to break into the first team’s starting XI. There were top-class players such as Faye White, captain of both Arsenal and England, ahead of her in the pecking order.

As a result, the defender was mainly restricted to reserve-team football during her year-long stay in North London.

“We ended up winning a league medal with the reserves. And I still have that today, I’m happy enough with that.

I’ve no regrets [about the Arsenal move], it just wasn’t meant to be.

The Dubliner had even been offered a contract extension by Akers, but homesickness coupled with a lack of first-team football meant both herself and Thorpe decided to return to Ireland. Tracy, by contrast, did break into the first team. She enjoyed a successful and lengthy career with the Gunners, and still lives in London to this day, working behind the scenes at the Premier League club.

Heapes saw Tracy for the first time in roughly 18 years last May, when a group of former Irish footballers arranged a catch-up over Zoom.

And it was with those players that Heapes shared some of her fondest memories on a football pitch, as she won 26 underage caps and made 12 senior appearances in total for her country.

“I don’t have physical caps, because they weren’t given back then,” she says.

“U18s was probably the best age group I played under. There were six of us that [went on to play] for the senior team — myself, Caroline Thorpe, Yvonne Tracy, Dolores Deasley, Elaine O’Connor and Niamh Connolly.

“I remember we were playing an U18 tournament in Poland. We flew directly from Poland to Czech Republic to play for the senior team. They flew six of us from one country to the other, which was quite cool.” 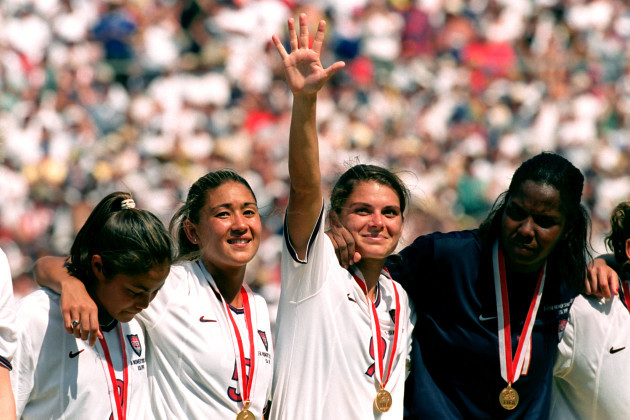 During her Ireland career, Heapes came up against the USA’s 1999 World Cup winners.

The highlight of Heapes’ time with Ireland is indisputable. She was part of the squad that travelled to Boston to face USA, who were playing their first game since triumphing at the 1999 Women’s World Cup.

“There were 52,000 people in the stand,” she recalls. “Probably half of them had Irish flags, because Boston is the capital of Irish America.

“We got escorted to the pitch and all by guards with the lights and the coach. There were fans outside asking for autographs. Imagine that, at 17 years of age. It was quite surreal, it was brilliant.

“We lost 5-0. They didn’t score in the first 20 minutes, so I think that was a result for us. I didn’t start the game, I came on at half-time at left full-back. I had a good game, I thought myself, so I was proud of that.

“It sure was a test. You had the likes of Mia Hamm running at you. They wouldn’t have been on telly at the time. You’d only hear about them and then, all of a sudden, there they are standing beside you, towering over you.”

After returning from Arsenal, Heapes continued playing for St Catherine’s until the age of 30, when she could feel her passion for the sport increasingly waning.

“My father died in 2013,” she explains. “So after that, I sort of lost a bit of heart in football and probably life — he died suddenly.

I found myself, later on in the years, just not loving it the way I used to love it, the football. I found myself not turning up for training sometimes and expecting a game.

“We were playing the All-Ireland final in Richmond Park against St Francis. That was my last game for St Catherine’s or any team, I haven’t played since then.

“I was tempted a couple of times to go back, but then work got in the way, and I bought a house. I needed to work, so I worked late nights, and they were training nights.

“I think I did everything as well that I wanted to do at an early age.”

These days, Heapes works for Dublin City Council in Cabra Library. Her football career may now be part of an increasingly distant past life, but she can reflect proudly on her achievements, winning numerous titles with Catherine’s, signing for the top English side of that era and representing Ireland against the world champions in front of a packed crowd.

And it’s just as our interview is concluding that she happens to mention perhaps the most remarkable element of her story.

“I was born with a clicked hip — I didn’t walk until I was four,” she says. “So the odds were against me when I was born. My mother can’t believe it. For me to run around the pitch for 90 minutes, it’s a bit of a miracle I suppose, isn’t it?”