Skip to content
CANNABIS CULTURE – Islamic accounts refer to a potent hash oil preparation known as dūḡ-e waḥdat, which may be similar to the Zoroastrian mang/bhanga infusions which I discussed in an earlier article.
Hash oil was prepared in the Islamic world by boiling cannabis and skimming the drops of oil from the surface of the water. “Hashish oil is generally consumed by thoroughly mixing a drop of it with a litre of dūḡ (a drink made from yogurt), and drinking the resulting mixture. This mixture, which is extremely potent and dangerous, is called dūḡ-e waḥdat (the dūḡ of annihilation)” (Gnoli 1979). As Encyclopedia Iranica describes:

DŪḠ-EWAḤDAT “beverage of unity,” concoction made from adding hashish extract (jowhar-e ḥaīš) to diluted yogurt (Šahrī, VI, pp. 412, 423). The resulting tonic is drunk by certain mystics as a hallucinogen during their rites. ʿAlī-Akbar Dehḵodā, in his compendium of Persian proverbs and dicta (1339 Š./1960, I, p. 255), quoted a verse from Kamāl-al-Dīn Ḵojandī (d. 803/1399) in which the use of the narcotic by a Sufi sheikh is mentioned. Apparently some less scrupulous Sufis used the drink to attract followers (Šahrī, VI, p. 419). (Omidsalar, 1999) 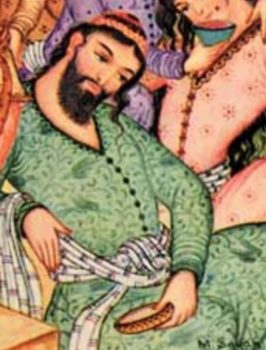 The use of dūḡ-e waḥdat has continued through to the modern-day in Iran, despite considerably harsh penalties surrounding its consumption and distribution. The preparation is also known as “bangaab” (bang = hashish + aab = water), but more commonly it is dugh (water + yoghurt, scented with herbs) and powdered hashish. Dūḡ-e waḥdat is a favoured libation of the dervishes). Its potential to make one unconscious has resulted in some rape cases where it was alleged to have been given to women to knock them out. Its use by Islamic mystics however, was directed at annihilating the ego, in order to Unify with the Universal Consciousness.