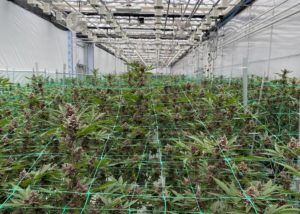 Under current regulations, a license for a small outdoor cannabis grower costs $4,820 per year.

By comparison, a Tier 1 mixed-light license – for growers who rely on natural light, light deprivation or perhaps a combination of natural and artificial lighting – costs more than double that amount, at $11,800 annually.

Both licenses include the cost of RFID tags, which are used to tag plants and track them through the state’s Metrc seed-to-sale traceability system.

The growers use shade cloth or other materials to allow only 12 hours of sunlight, mimicking the amount of sun a plant would receive in a natural setting during the flowering phase.

While some mixed-light growers use supplemental lighting such as LEDs, the only difference between the two types of farms often boils down to the following: A mixed-light grower uses a primitive structure, such as a hoop house covered with a tarp, to control the amount of light that plants – otherwise grown outdoors – receive.

Although some growers in California hold both licenses, those strictly in the mixed-light category say the licensing fees are financially unworkable.

Cannabis growers who prefer to use outdoor techniques as well as light deprivation are asking for a revision to the rules: They want regulators to allow light deprivation to be included in the small outdoor license category, a move that would reduce their licensing costs significantly.

Others say it makes the most sense for the state to charge growers a harvest rate for those who can get up to three crops with light-deprivation techniques or autoflower cannabis varieties.

The latter automatically undergo their growth cycle regardless of variations in the amount of sunlight.

In an April letter signed by eight leaders of California cannabis grower associations and sent to Gov. Gavin Newsom in response to his office’s 2020-21 budget proposal, industry executives asked marijuana licensing unit CalCannabis to restructure pricing for cultivation licenses. CalCannabis is a division of the California Department of Food and Agriculture.

“The CalCannabis price structure assumes that each license holder will harvest the maximum square footage allowed under the license type, and will achieve the number of harvests assumed for each license type,” the letter notes.

However, growers often don’t achieve the number of harvests associated with their license types.

According to a spokesperson for CalCannabis, this issue has been raised at public Cannabis Advisory Committee meetings, and the Department of Food and Agriculture is considering the comments and recommendations.

The California-based International Cannabis Farmers Association surveyed 122 growers to get input for the letter to the governor.

Of the 52 mixed-light Tier 1 license holders that completed the survey, 58% reported achieving only two harvests per licensed year.

Those growers paid an average of 33% more per square foot of canopy than their peers holding the same license who achieved the full three harvests assumed by CalCannabis, according to the ICFA.

“Some growers are getting more than three harvests. Some are only getting one,” said Kristin Nevedal, chair and founder of the International Cannabis Farmers Association. “But everybody’s paying like they’re getting three harvests.”

The letter also recommends that regulators rework the pricing system for cultivation licenses to charge growers for what they produce – versus what they might produce.

“This would result in a tremendous cost savings to the agricultural sector of the supply chain,” the letter states.

At Huckleberry Hills Farms in Humboldt County near Garberville, owner John Casali grows on 2,500 square feet of licensed outdoor space next to a 2,500-square-foot plot that relies on light deprivation.

“(The state) developed that regulation because they were worried we were squeezing in an extra harvest they weren’t able to tax us for,” he said.

He agrees that charging a fee by harvest makes the most sense.

Currently, outdoor growers using autoflower varieties can get three harvests a year but must pay only the lower outdoor-grow license fee.

Casali is concerned his 5,000-square-foot farm won’t be able to survive under the current regulations.

He added that the taxes on top of the licensing fees make it even tougher.

At Elyon Cannabis in Santa Rosa, Sonoma County, founder and CEO Ron Ferraro uses hoop houses and tarps for light deprivation on his cannabis plants. He gets about two harvests a year by manipulating the photo period.

Ferraro said he built his company based on light deprivation.

“We’ve seen a lot more success under a hoop house,” he said.

Aside from the light control, the shade cloth he uses helps to control temperature and prevent the tips of plants from burning in hot weather.

Also, as an added benefit, the system protects his plants from chemical overspray wafting over from nearby vineyards.

“It just makes more sense on the standpoint of quality and affordability,” Ferraro said.

He believes his farm should be considered an outdoor operation and said growers should be charged based on the finished product and yield.

The state requires cannabis companies to log every step of the supply chain into the seed-to-sale tracking software Metrc, and Ferraro sees that as the perfect technology to help assess how much each grower should owe the state.

For Tina Gordon, owner and founder of Moon Made Farms in Humboldt County, the benefit of using light deprivation is to produce product year-round.

She prefers to grow full-season outdoor, sun-grown cannabis but recognizes the benefit of controlling the harvest schedule in a region with unstable conditions, including wildfires and varied moisture levels.

To Gordon, using light deprivation to control the growth cycle isn’t as much a matter of profitability as one of ethics.

The larger concern for Gordon is what impact cannabis growers are having on the environment, beyond just the cost of production equation.

“It’s an evaluation based upon return,” she said, “but I can’t separate that return based on the environmental impact.”

In a year with little rainfall, for example, a grower might choose to use light deprivation to cut the season short and not deplete already strained resources such as water.

But it doesn’t make sense financially to produce only one harvest while paying the much higher licensing cost.

“The structure incentivizes using as much water as possible,” Gordon added.

Bart Schaneman can be reached at [email protected]